Recent comments by Peter Dutton on Sudanese crime in Melbourne, in support of the Victorian Liberals' attempts to court that old political tart Laura Norder, underline two failures of strategy: in his portfolio, and within the Victoria Liberals in their quest for state government this November.

The end of the line

Immigration policy in Australia was set at the turn of the century by then-Immigration Minister Phillip Ruddock, backed by John Howard and his government and only ever tweaked by successive governments since then.

The first thing to say about immigration to Australia overall is that it has increased significantly this century. Where the crackdown has come, and the headlines, is in the refugee and asylum-seeker intakes.

Ruddock developed the idea of a 'queue' for refugees - yes, the world was full of desperate people fleeing war and persecution, but all that was required for such people to enter Australia was to "join the queue", fill out some forms and applications would be processed in due course. People who paid people-smugglers and arrived in Australia by boat without visas were "queue jumpers", denying places on the small (and successively reduced) quota for refugee intake to those who did all the right things and waited patiently.

Here's where Dutton has torpedoed that policy, and made himself look silly: successive Immigration ministers from Ruddock to Morrison told us there were people waiting patiently in refugee camps in Africa unable to enter Australia because bad people from the Middle East tried to jump the queue by coming here on boats. None of the people on Nauru or Manus are from South Sudan. They are people who have come here through the very vetting systems that Dutton now oversees.

If you agree with Dutton that Sudanese gangs are terrifying Melbourne, then it follows that he has failed to vet these people properly. You can't believe that Dutton, with his inflated powers as Home Affairs Minister, is keeping Australia safe if you also accept that he has waved through the very people apparently causing this mayhem. Say what you will about Daniel Andrews, his government simply has no role in immigration vetting. Why detain people at Nauru, Manus, Woodville or anywhere else when you are clearly so careless? Dutton is undermining his own narrative:


"But the short answer is that, if people haven't integrated, if they are not abiding by our laws, if they don't adhere to our culture, then they are not welcome here."

Bit late for that champ.

No journalist has called him on it. Credulous dickheads like this one simply hung a whole story on a radio transcript. He even took to social media to insist - without evidence, like the gun journalist that he is - that somewhere in Yarraside there is so a homebody who uses fear of Sudanese gangs as an excuse to hide quivering within their dank little abode.

In 2018, we know that a quote - even a direct, exclusive one - is no basis for a story. Politicians say things, in the same way that the sun rises in the east or bears shit in the woods; it is not news in itself. The fact that a press gallery exists as a make-work scheme for journalists gathering and disseminating quotes is actually a reason against supporting the Australian media, at least until they realise what a low-value proposition it is.

Victoria isn't the place for a Laura Norder campaign, despite the self-defeating willingness of Matthew Guy to give it his very best shot.

The last three Liberal Premiers to win office by beating Labor - Ted Baillieu, Jeff Kennett, and Henry Bolte - all did so without a heavy focus on Laura Norder (the latter two won because Labor had collapsed internally). The last Coalition government of 2010-14 (in which Matthew Guy was a minister, and many of his frontbenchers were also ministers) reduced police numbers and experienced a decrease in crime overall. Guy might call out Sudanese gang activity, but it isn't clear what he proposes to do about it, or whether those proposals might actually decrease criminal activity to warrant a change of government.

Victoria is the state with both the highest proportion of residents born outside Australia. It also records the lowest aggregate vote for One Nation and its anti-immigration ilk. When Pauline Hanson was setting up in the late 1990s, the only senior politician who really called her out was not Kim Beazley, but then-Premier Jeff Kennett. Racial demonisation is not unknown in Victorian politics, but Matthew Guy is going to have to work harder than he thinks to make it work for him.

If you don't believe in Victorian exceptionalism, consider how Laura Norder failed the Coalition in NSW. In the late 1990s, Labor held office under Bob Carr, and the Coalition under successive leaders was unshakeable in its conviction that Laura Norder could force Carr out. Carr simply never let the Coalition get to the right of him on those issues. Whenever a crime hit the front page of the Murdoch papers, Carr would introduce a new bill to parliament to reiterate opposition to, say, murder or sexual assault, and would happily match the Coalition in lengthening sentences or criticising judicial officers based on little more than half-baked reporting of complex legal cases.

In Queensland, the Newman government retreated into Laura Norder once its election promises for an economic bonanza proved elusive. Again, Labor simply matched them on sentencing or whatever, and where Labor wouldn't match (e.g. the appointment of magistrate Tim Carmody as Chief Justice, or the weird pink jumpsuit thing with bikies) Newman had lost more votes than he won. In Western Australia, the economic performance of the government rendered Laura Norder moot. In the Northern Territory, the CLP ended up with the brutality of Don Dale and nowhere else to go. In South Australia, the ACT, and Tasmania, the Liberals shrieked about Laura Norder for the entire time they'd been out of government, and so what?

Laura Norder is a dead loss as a strategy for the Coalition to win government. In Victoria and elsewhere, it has to be part - a small one - of a wider strategy to highlight Labor's internal political collapse. Getting Labor to collapse internally from the outside can be tricky and waiting for it to happen can be boring, but it happens nonetheless from time to time.

The deaf leading the deaf

So, a tone-deaf federal Coalition government is going all in to help a tone-deaf Coalition opposition in Melbourne execute a dud strategy. Peter Dutton impresses nobody who is not already a rusted-on Liberal, and wins no votes in that state which simply do not exist to the right of the Coalition. The federal government's dumping of Gippsland's Darren Chester from Cabinet makes it perfectly clear how it values Victoria and Victorians.

The fact that he lectures Victorians from far beyond the Murray - further even than Canberra or Sydney - is more of an issue than cosmopolitan Melburnians dare admit. Queensland is where Victorians go for sun and recreation, not for advice on how to run their state. With the restaurants of Melbourne doing a roaring trade, Dutton isn't merely wrong but downright foolish. An authoritarian who looks foolish loses everything.

Dutton, and similar comments from Turnbull, aren't helping bring about a Guy government. Given the precarious numbers of their own government, can they be said to buttress their own government's standing in Victoria? A seat won is a seat won, whether in Queensland or Victoria, yeah?

Maybe Laura Norder will help Jason Wood in La Trobe. But then Wood is a former police officer, and every problem is a nail when your only tool is a hammer. The Coalition seemed happy to drop him in 2010, an election in which La Trobe was one of the few seats Labor won from the Coalition. La Trobe aside, it is hard to see where the federal Coalition government will gain votes in Victoria from its contribution to wooing Laura Norder.

Keep in mind that the Victorian state electoral boundaries are due to be redrawn before the next election. When they were redrawn on the state level in 2013* they disadvantaged the Coalition. This is not because of political bias but geography: Melbourne has expanded to the north and west in recent years. It is likely that new seats will be created there, at the expense of rural seats or those in Melbourne's south-eastern suburbs, once the bulwark of the Liberal Party. The Coalition parties have no base or infrastructure to speak of to the north and west of Melbourne.

Polling trends indicate the Coalition is unlikely to win new seats, and that any new seats will almost certainly be beyond their reach. It will struggle to hold marginals like Chisholm, even if its boundaries change relatively little. It did surprisingly well in Melbourne Ports in 2016, but this is unlikely to be repeated given the government's insensitive handling of same-sex marriage, and given a likely state election campaign going hard on Laura Norder and failing. This will intensify pressure on the party's safest seats for party renewal. Of the safest Coalition seats in Victoria, only one (Kevin Andrews in Menzies) is held by someone aged over 60 with more past than future, and the party can't get rid of him: its battles for party renewal will not be expansionary, they will be internalised, and bloody.

No they don't. They have no effect at all on relentlessly declining sales. And even if this were true, do Matthew Guy and Peter Dutton have some sort of obligation to help Murdoch sell papers at the expense of winning elections?

There is no such thing as great tabloid journalism, it's all patronising shit. Murdoch has withdrawn his rags from official circulation audits because he's so embarrassed, and because he runs them for reasons other than profit-making business. Here's proof that anyone can do it: 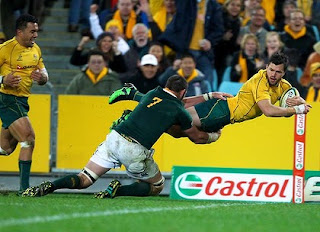 * In searching for information to link to in support of this piece, I searched for Antony Green's detailed commentary on the Victorian redistribution, but it would appear that the ABC has dumped that content.
at 4:29 pm 19 comments: