On the killing of Iranian nuclear scientists

Recently I let out a stray tweet on the targeted killing of Iranian nuclear scientists, and I was challenged on Twitter as to why I took the approach that I did: 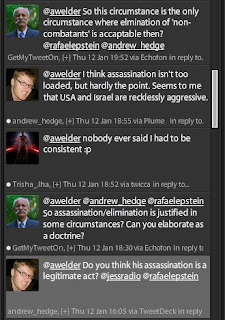 I'm not sure it's my job to develop or propound any sort of "doctrine", but here's what I think about the targeted killing of Iranian nuclear scientists.

First, the assumptions I operate under, in no particular order:
There are international measures for regulating the development of nuclear power and nuclear weapons, including through the IAEA. I'm sure that Israel is working within those structures to monitor Iran's nuclear program:
By targeting Iranian nuclear scientists, Israel is forestalling the development of a real and major threat to its existence.

Imagine that the Los Alamos Atomic Laboratory had been destroyed, or that individuals associated with it (e.g. Oppenheimer or Edward Teller) had been targeted for killing by the Axis powers or forces allied to them before the atomic bombs were dropped on Japan. Such action would have been legitimate acts of war.

Would I be upset if Australian scientists got picked off by bombs? Yes, I would (and not just because Sydney traffic is bad enough as it is). For all the criticisms that may be made of Australian foreign policy, I don't believe that the Australian government is engaged in wiping another country off the face of the earth.

Iranian nuclear scientists are 'combatants'. Yes, they are. Given the regular official harangues against Israel - not dissimilar to those against Iraq before and during the conflict of the 1980s - Iranians who participate in their nuclear program know full well that they are threatening Israel and participating in a malevolent foreign policy. The development of a nuclear program by an explicitly and demonstrably aggressive Iran is the same sort of belligerent act as as the amassing of troops, beating ploughshares back into swords, and other acts indicating that a state is initiating war. Again, Israel is not obliged to place its exclusive trust in international agreements or to be bereft of options should those agreements fail to protect it from destruction.

Iran has been practicing terrorism against Israel, with its rhetorical threats backed up with their support for militant Palestinian elements. Targeting Iranian nuclear scientists has the same terrorist effect. Iran can still exist without its nuclear program, but Iran's threats against Israel are threats to the whole nation, its whole people. I think the targeted killings have been clever and resourceful against heavily protected nuclear scientists who are working to obliterate an entire people.

By contrast, the Iranian government has been boorish and inept in hoping that wiping Israel off the map is some sort of rallying cry for a failed regime. Its treatment of Iranian dissidents does not give the Iranian government, nor anyone else, any grounds to complain about the targeted killings of nuclear scientists.

If the Iranian government caught any agent in the act of preparing or placing those bombs, it would be hard to call for or expect proper due process in dealing with such a person.

Israel's behaviour is far from perfect but in seeking to forestall Iranian nuclear weapons my sympathies are with them, and I believe that sympathies for Iran on this matter (beyond a simple and true human empathy for the grieving families of the individuals killed) are misplaced.
at 11:18 am