Abbott and Slipper 2: The Tar Baby 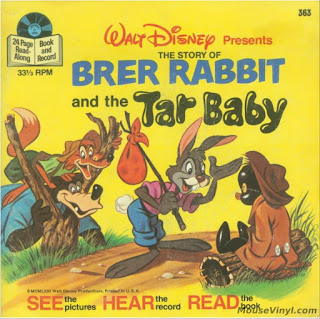 For those who came in late:
That was last week, this is now.

The whole Coalition critique of the government depends upon the implication that it would do better were it to win office. Despite what Michelle Grattan might declare in the course of her anti-Gillard jihad, the Ashby-Pyne-Brough shenanigans overshadow any legal findings that come out of the sexual harassment case. Ashby went into Slipper's office as an LNP man and whatever else happened to him, Ashby continued as  an LNP man while working there. Sexual harassment cases are resolved in favour of the plaintiff only when the plaintiff has unimpeachable bona fides; let's see what might happen before a court, if the case makes it that far.

Like all politicians, Abbott makes himself available to the media when it suits him. Unlike most politicians, he doesn't seem to have much else to do other than court the media. Unlike many senior politicians (and in contrast to his main opponent, the Prime Minister) Abbott turns tail and walks away from press conferences on the rare occasions when he is asked tough questions. This is what he did this week when put on the spot over Ashby (it's increasingly Ashby that is the focus of this case, not Slipper). Gillard faces down hostile media packs who talk over her and ask questions that assume everyone accepts the Coalition line. Abbott, like Sir Robin, bravely ran away; and not for the first time.

It's one of the most basic tenets of PR not to make yourself the story when your opponent is under attack, but for the Coalition it's way too late for that.

Abbott has made a whole lot of not-quite-promises about a lot of things; not quite promised to bring in a paid parental leave tax, not quite promised to support a US military presence in Darwin and not quite promised to turn refugee boats toward Indonesia, to name three. The two issues on which he has gone strongest and hardest, and on which his reputation most depends, are the political destruction of two men: Craig Thomson and Peter Slipper. If Abbott can't wipe those two guys off the political map, what hope does he have against an incumbent PM with a long and strong legislative achievement (yes, including an unpopular tax that seems to have already hit its maximum depth of unpopularity)?

Neither man might get off without a blemish, but mere smear is no longer enough to knock them out of such a high-stakes game. For Abbott to succeed, for him to have the momentum that will carry him into government, he must be seen to have forced these two men out of politics. He must make the case that his government would be a cut above the incumbent. To fail at the first of these, as he has, is to fail at the second and more telling. If people no longer believe an Abbott government would be no better or even worse than the incumbents, we may as well not even speak of such an eventuality and congratulate the Gillard government on its re-election.

For Thomson, any action against him will be taken by the police and/or other apolitical authorities. He's been hung out to dry by Labor but Abbott has attacked him day after day for four years, almost denying him the ability to be present at his daughter's birth. Journalists who reported that an exiled Thomson increased Abbott's chances did not understand what was going on, and were therefore no help to those to whom they were supposedly reporting.

The action against Slipper looks increasingly like a put-up job by his political opponents. The political force of both the sexual harassment case and the cabcharge thing have been all but blunted. The Coalition have nobody who could do Slipper over slowly and carefully and utterly like Faulkner and Ray did Colston. Will we see more fabrications, like Justice Kirby's driver records? Will Abbott end up crying wolf when he should be one?  Abbott promised to make Slipper Labor's problem; he deployed the big guns but his targets are still standing. Even Thomson isn't Labor's problem any more. What now?

Abbott won't collapse straight away, but make no mistake: his authority is blunted. Given that he's no great shakes in terms of policy, he must succeed in personal destruction or fail utterly. That's why hand-wringing pieces like this claiming Abbott's tactics are "dangerous for democracy" is hysterical nonsense. Voters have always had and exercised the ability to know bullshit, to call it by its name and to call out the bullshitter; to claim that people are so feeble as to be led along by Abbott and the Murdoch press is to be patronising to the point where you can't represent those you would govern.

Speaking of patronising, who is Phillip Coorey trying to kid with this?

Timing is important, but it isn't everything. Party membership might be declining in NSW but there is still more than one branch in that state.

Look at the example that Coorey uses to open his argument: Peter Hendy, poster-boy for the smug and abrasive apparatchik. Hendy is a creature of Canberra but he lacks the guts to run there. Instead, he's up against Mike Kelly, more than just the "Labor frontbencher" with which Coorey dismisses him. Followers of Kelly's Twitter feed know that he's indefatigable in that electorate, "... where the pine-clad ridges raise | Their torn and rugged battlements on high, | Where the air is clear as crystal, and the white stars fairly blaze | At midnight in the cold and frosty sky". How much time Hendy has to press his case matters very little when you consider those who have met the man describe him as either insipid or nasty; those who are yet to do so, even those who want a Coalition government, aren't exactly in for a treat. It's one thing to give advice but quite another to live or die on the quality of it. For a start, Hendy should but won't be strong enough to reject campaigning assistance from Peter Phelps.

In 2010 the Liberal candidate was David Gazard: much more personable than Hendy but cut from the same staffer-consultant (some call it "hack") cloth. Kelly won a huge swing against Gazard (one of the few Labor candidates to do so in that election) and will almost certainly do so against Hendy. What lessons can the Liberals be said to have learned from the last election?


By the middle of June, the Victorian Liberals would have preselected candidates for Corangamite, Chisholm, Deakin, La Trobe and Jagajaga, the latter of which is held by the Family and Community Services Minister, Jenny Macklin.

Yes, but which candidates? The leading candidate for LaTrobe is Jason Wood, the former MP unfairly bagged here but who was so cruelly abandoned by the party machine in 2010 that it would cause more problems for the Victorian Liberals than it would solve were he to realise his dream. The Victorian Liberals don't have the talent pool to staff a state government, their Senate team is a joke, and those who hold their safe House seats aren't nearly as good as they think they are - let alone being as good as they need to be.

This week has shown that whenever Abbott gets an advantage over Gillard and Labor, he blows it. Any attack on the Budget will be blunted by his failure to dispose of low-hanging, rotten fruit like Thomson and Slipper. The idea that Abbott might fancy his chances against Treasurer Swan, Prime Minister Gillard or the Member for Eden-Monaro is fantasy - fantasy for him, and delusion for those who follow him so closely that their noses end up out of joint (not just brown) when he turns tail and walks away from those he would purport to lead.
at 11:10 pm