Evaporating in the heat

The first example is Greg Hunt eating his own dogfood, or attempting to.

If his Green Army had any credibility at all it would be further advanced than it is. Note how strong-sounding, how definite those first five paragraphs are; then comes the admission that, less than twelve months to the election, he's got nothing:


We are asking the Peninsula community to submit ideas for worthwhile projects. It may be cleaning up a local creek, restoring a bushwalking path, establishing a boardwalk or rehabilitating the foreshore, for example.

We are keen for local environment groups or councils to be involved. They may work together with the Green Army to get the job done or they may act as co-ordinators for projects which they see as a priority for our area.

Areas such as Chinamans Creek, the Balcombe Estuary, Red Hill-Main Ridge walking and equestrian trails and the foreshore around Western Port and Port Phillip bays are possible options for a Green Army scheme.

Importantly, we want the community to come up with the projects to ensure they are locally driven and are the right priorities for the Peninsula.

Never mind the use of the royal pronoun here. If Hunt was in any way serious about his policy, he would have issued the above press release two years ago, and used his own electorate to deal with teething problems in the scheme. He would have been able to say to Coalition MPs and candidates, to the media and anyone else: I believe in this policy, it works on my home turf and it will work for you on yours too.

Sitting here in Sydney, I could have done a quick scan of local papers from the Mornington Peninsula and tossed out some idle ideas like Chinamans Creek or whatever, and sounded every bit as keen and as knowledgeable as Hunt is in that statement. If he really was "keen for local environment groups or councils to be involved", he'd know those people by name, he'd convince them of his commitment and bona fides, and have them support a community action plan that works for that area - and which shows the nation how it's done.

Now, it's just too late. The hoo-ha over the carbon tax and how it was going to ruin us all has shot Coalition credibility on environmental issues. There seems little point in planting millions of trees if they are just going to burn every other summer, and become the Coalition's equivalent to Labor's "fatal pink batts". The fact that the Coalition don't budget adequately for the initiatives Hunt talks about is a worry. Those issues are too big for Hunt and Abbott to nail down between now and the middle of the year, when the election campaign will start in earnest. 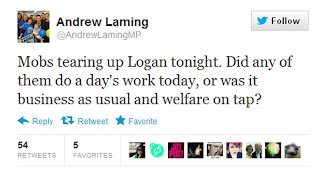 This is what you'd expect from some idiot on gruntback radio, but not for the Shadow Parliamentary Secretary for Regional Health and Indigenous Health. He compounded it with this:

"To clarify" be damned. This wasn't a clarification, it was a reversal; or it would have been had Laming seriously believed he had made a mistake and sought to rectify it.

You're dead right jobs and training are the key for Aboriginal and Islander people who face the various kinds of disadvantage which led to that riot. It remains unclear what Laming is doing with all the resources provided to him by the taxpayer to "[work] together with those communities".

The tweets Laming has sent since those are telling: no references to meetings with communities, working towards peace and jobs and all good things, but merely how successful he has been at getting his message out. Laming's tweets are not boofhead aberrations, they are the real deal for this man, who he is and what he's about.

The idea of the second tweet was to say anything to get the issue off the front pages. J'accuse Liberal Ambassador to Social Media Tommy Tudehope here. Journos should be alert to hosings-down and ramp up their attention accordingly.

One of those cliches that the mainstream media swear by, and which is slowly killing their entire industry, is that we are now in "the silly season"; that no issue other than cricket is worth reporting on, and that there is plenty of footage from the northern hemisphere to pad out news bulletins. The fires have put paid to that. Nobody gets a month off over January any more. It is entirely reasonable to expect journos to look into issues and not just rely on tweets (besides, [insert standard journosphere dump on social media here], amirite?).

There is no reason why a journalist should not be looking into the extent to which the Shadow Parliamentary Secretary for Regional Health and Indigenous Health actually deals with indigenous communities other than Noel Pearson. Simply reporting Laming's initial tweet and the follow-up as POLITICIAN GAFFE SHOCK was identical in terms of scope and depth to the analysis of the matter provided by social media, which pretty much invalidates [insert standard journosphere dump on social media here].

You can see why those who run the Coalition want to crack down on their people using social media. Laming is supposed to be one of the more knowledgeable ones on this score. Mind you, those who run the Coalition have decided we need to know more about the workings of Peta Credlin's fallopian tubes than Greg Hunt's environment policy or Andrew Laming's indigenous health policy. They thought it was a good idea for Abbott to purloin a truck from a bushfire brigade and use it for purposes not designated by that brigade or by RFS headquarters.

It is absolutely true that the Rudd government did not release its election policies this far out from the last election. It is also true that the Rudd government had produced two budgets by that point, and for better or worse had a track record. The Coalition have no track record other than saying no and cutting back on existing policies. Any promises that the Coalition made on the environment or indigenous health would be sucked into its "budget black hole", an example of one credibility-sapping theme cancelling out just about every other. The Rudd government did not win a majority of seats at the last election, and it is unclear why the Abbott opposition want to follow such a strategy anyway.

The third example comes from before the last election, and should have been more searing than it was. As I said at the time on my blog, and Greg Jericho said in his fine book The Rise of the Fifth Estate, then Shadow Communications Minister Tony Smith hadn't done his homework on telecommunications before launching his policy. He had a collection of motherhood statements that simply didn't fit together, and which was eviscerated by tech journalists who attended his launch. Hunt and Laming - and every other member of the Coalition - should have vowed not to let themselves get so exposed as Smith was (and as Peter Shack, Shadow Health Minister in 1990, had been).

Hunt, Laming and every other member of the Coalition is every bit as exposed as the Coalition were in 1990. Journalists should be alert to this and it is an indictment on them that they aren't. This is the point where it's too late to flick the switch to policy substance: there is no switch and the wire hasn't been earthed, so someone is going to get burnt (and it isn't the government).

It isn't too late for the journosphere to use this opportunity to do some scrutiny on a blithe Coalition, as Richard Ackland demonstrated. Ackland's long-standing and specialised focus on law and justice issues made him a blogger before there were blogs. A regular contributor to The Sydney Morning Herald but not of it, Ackland puts the lie to those in the journosphere who fear outsourcing and the so-called "diminution" of their "profession".

When the heat is on you see what people truly value, even if they panic and act clumsily. Greg Hunt values spreading his message widely but not to any depth, not in his backyard nor in mine nor yours. Andrew Laming thinks he's being paid by the taxpayer to turn flatulence into words, like Piers Akerman or Gary Hardgrave do. Paid journalists take them at their word when they say they are actively acting action, or that they're contrite: it is possible that they have lost the ability to fossick for stories that go beyond the press release.
at 3:48 pm