Going in too hard

This exchange on Twitter shows how social media can apply good sense to political journalism where it would otherwise be miserably absent: 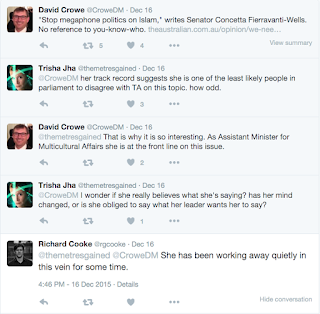 David Crowe from The Australian was, in line with his predilections and those of his employer, galumphing down the road of a shock-horror story of differences of opinion within the government until social media pulled him up. Naturally no consideration of the issue at hand, and its effect beyond Canberra, is forthcoming or even possible from such an experienced press gallery denizen. The post from Richard Cooke (not a press gallery journalist) above shows a perspective that Crowe lacks, but also reveals that Crowe is not even sure what politicians like Fierravanti-Wells are up to. What is the point of all those support services in the press gallery when people like Crowe - no blow-in, supposedly a senior operator there - disregards years of slow and patient policy in favour of cliched schlock? It was good of Fierravanti-Wells to put out her statement within Crowe's working hours.

So Fierravanti-Wells and Abbott are both conservative Libs from NSW. Crowe, like many experienced political journalists, can't draw on past events to explain what is going on now. He's probably right in assuming such audience as he has cannot even handle nuance, but a good journalist would make an effort nonetheless. Once you understand the Fierravanti-Wells/ Abbott relationship, Crowe's feebleness in lunging for the low-hanging fruit of division (and missing!) becomes apparent:
After all that, Crowe could only run the stale and pointless SPLIT SHOCK narrative.

Over nine years of blogging I've dismantled Crowe's finest constructions numerous times, and I think I've established that he is a galoot. He stands at the dead intersection of both press gallery drones and Murdoch yes-people, the most unfortunate crossroads since Robert Johnson's in the 1930s. Unlike Johnson, Crowe is not developing any new licks; he is just assembling and reassembling political cliches from the journalistic tailings provided by his employers. I almost feel sorry for him. Perhaps it's Christmas sentimentality, or perhaps I'm just losing my touch.

On one level, I really want to believe that a) press gallery journalists work hard and b) are clever enough to get around political manipulation; but because the evidence points away from such a belief I just can't support it, and can barely even humour true believers. We need more and better information on how we are governed (and how we might be governed) than the press gallery are capable of providing: such a belief should be more widely shared, given the failure of the contrary assertions and the manifest inadequacy of the political choices proffered to us. People make dreadful decisions when they're misinformed, when at the ballot box, when making investment decisions, or at the Cabinet table.

Nobody in the press gallery, nor in the wider Australian broadcast media responsible for political news, is any closer to getting this than they were in 2006. They cannot bear their own culpability. They would prefer to blame things beyond their control (the internet, ad revenue), or even invent them ("24 hour news cycle"), rather than change their ways.

Nine years from now the thick crust at the top of the press gallery will probably still be there, and coverage of government won't be any better, and the media organisations probably won't have the good grace to shut down and stop wasting everyone's time and resources. In calling for more and better, over and over, perhaps I am repeating myself; but this is true of anyone with a cause unfulfilled that is too important to be abandoned, yet so bereft of measurable impact that it fails to attract the like-minded to put their shoulders to the wheel.

Yeah political coverage is broken, but what can you do? You won't change them. That's why I go in hard here: the failure of Australian political coverage matters, it has far-reaching consequences and the incumbents cannot be persuaded. When journalists are sacked I neither cheer nor weep but am amazed that the press gallery is spared, while proper journalists are dumped unpaid from a profession that needs the good ones more than ever.

It's so stupid that coverage of East Timor and West Papua, or the Rugby World Cup, is better than that of the federal government.

Should I take the time to show political journalists how they should be doing their jobs, per the dotpoints above, or do press gallery journalists work for billion-dollar corporations that can do their own fucking research to save their own worthless employers from further discrediting themselves? Isn't the whole point of them to provide information to those of us paying attention, but too busy to do so fulltime?

You don't have to do your own foraging to eat - so why should you have to do your own journalism to find out what's next, and what your options are? People talk about the future of journalism as though current employers of journalists have one. In an information age information providers should be making out like bandits. The fact that broadcast media aren't, that they are not only incapable of organising a booze-up at a brewery but are dying of thirst in such an environment, shows that they are stubbornly persisting at something other than providing necessary information. Rarely can you stop them lapsing back into their stock of cliches to try and describe situations that simply don't fit them.

Not being a press gallery journalist I knew Abbott would be a fuck-up as Prime Minister, and said so. Every day he held office defied political gravity. I thought he'd be such a fuck-up that he wouldn't get there in the first place, and I underestimated the extent to which Crowe and his silly mates covered for him and made such a clueless man look like he had all the answers.

Not being a press gallery journalist, I can amend a previous post where it is eclipsed by better information.

All the very best to you over Christmas and the New Year, dear reader, even if you are like Crowe and the still too many others who can only write the same stories about the same things in the same way that he does: it's called media diversity. I'm still considering doing formal in-depth study into the sheer depth and breadth of the failure of Australian political coverage 2006-2015. Summertime is good for reflections and suggestions, and as ever any suggestions on how this blog can be improved will be welcomed to the extent they are constructive.
at 6:34 pm