Barking at nothing, part 1

It started with a bit of typical journo blindness to their own profession, and then moved through some slightly more insightful pieces, before I started wondering what it was all about.

Amanda Meade told readers of The Australian all about the Twitters:


But my pet peeve on Twitter is the way people congratulate each other in a very public way -- a kind of air kissing via tweet.

This made me laugh until I realised that Meade probably doesn't read her own paper. The worst offenders at blowing smoke up one another on Twitter are News Ltd employees. The following exchange ensued: 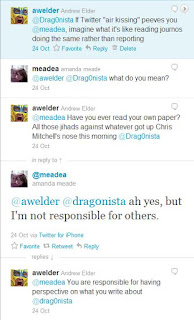 She's under no obligation to work with jerks, either. I started pitying journalists, and read the recent pieces by Laurie Oakes and, yes, Annabel Crabb and even Bernard Keane.

The Andrew Olle Lecture always starts out being mawkish and climaxes with a circle-jerk about how great journalism is and how great journalists are. Good on Laurie Oakes for resisting the urge to intone "I think journalists do a great job" (based on what, I hear you cry). Oakes misrepresented Tanner's argument with a bit of journo self-pity, which I bet went down a treat among his half-cut audience.

Watchdogs bark to scare off intruders and to warn their masters of danger. Dogs that yap, yap, yap all the time, particularly at things which aren't there at all are just bloody annoying. It ought to surprise nobody that you switch off constant yapping about nothing at all; what's surprising is the, er, dogged insistence on being called a "watchdog"when you're just needy and insecure.


Many of those bemoaning the media's performance seem to think the nation is crying out for more high quality news and analysis and heavier current affairs programs.

They're dreaming. If that was the case, Four Corners would outrate Masterchef. And I'd still be doing interviews on the Sunday program and writing for The Bulletin magazine.

That's right: there was only ever one definition of quality journalism, it's never ever coming back in any form, so just jump into the sewer and surf the swill. Don't bother with any rethinking about ways of presenting information, just admit it's all too hard and can we get Stephen Smith for next week?


Ask any of the political party back room operators why Labor and coalition election campaign commercials rarely feature detailed explanations of policy, and-if they're honest-they'll answer: "Because no-one would watch."

That's the whole idea: they are trying to bore people into disengagement so that they can do whatever the hell they like. They've done it to their own members, why wouldn't they do it to the public at large?

The main theme of Oakes' talk is that journalists churn through stories and are vulnerable to spin. Poor journalists. The question is, though, where is the value in that?

Who is it that's determining a faster and faster cycle of news, and a focus on trivia? I'm not. It's timid news directors who think that treading water at great speed is how they keep their jobs.

Whether it does or doesn't save the news directors' jobs isn't the point. Journalists will only lose credibility by churning out scatty, shallow and pointless stories. The output has no value, and over time those who produce no-value products themselves become devalued. Oakes foresees clearly the demise of his profession, and has no answer for it.

What Meade and Oakes fail to realise is that social media provide streams of links to information that make journos redundant. If I've clicked on a link in my tweetstream about recent events in Libya, why the hell would I want to read what Amanda Meade thinks about it? Why would I pay to do that? Why would I get up from Twitter and watch Laurie Oakes seek the views of the Shadow Foreign Minister, who won't have read the article or much else on events in that country?

Crabb does get the idea of the journalist-as-intermediary is now dead. She lets her cover slip by nominating Grog's Gamut as a good example of an up-to-the-minute blog, when its esteemed writer has been co-opted by the same outfit for which she works.

More importantly, Crabb lets herself down by underestimating how good writing makes a difference.


If you are a foreign policy wonk, you might well complain that your area of interest doesn't warrant enough serious column space in various of the daily newspapers in Australia. But can you really argue that you have less to read now than you did 10 years ago?

I've got a whole separate article in the works about foreign policy, but here we can answer Crabb by saying that quality writing and presentation will attract readers and better inform debates.

It isn't sufficient to say that one bit of journalism is as good as another, or that if one journo has deigned to wade into some difficult area of policy then that should be good enough for you, dear reader, and one less article Crabb doesn't have to research and write. A stressed and ill-informed journo will be trounced by a subject-matter expert who can write a bit and/or talk fluently every time.

By focusing on niche areas and regarding them, as fragmentations of the fewer and bigger media outlets most of us have known, Crabb misses the point about the fluidity of new media. Niche markets have always been lucrative for the mainstream media. The magazine Wheels is infinitely more profitable than the section of the newspaper which deals with cars. So too with Rugby League Week versus the couple of pieces on that game in the nightly news.

klieg light swung at him (yes, him), whereupon he would churn out some gravitas as befitted a dedicated, veteran journalist. Neither of these tried-and-died solutions are superior to what happens now, and the nostalgia acts can boil their heads.

The same applies to a lot of issues. The big news organisations just aren't that nimble. By the time the journo from Big Media has wheezed into place, the story is already out without the need to maintain a huge infrastructure or claim back money from expenses. It means that news is no longer best covered by journos, and that they're not trusted intermediaries any more.

What got me thinking about political reporting in particular were two quotes, one from Crabb and one from Keane:


... I think we should be very careful indeed about assuming that there is only one correct way to learn about politics, and that is to sit down with a cup of coffee, a madeleine and the Australian Financial Review.

Ah yes, madeleines, prompters of reveries in Proust ... but then I thought, Annabel Crabb could learn a lot from politics coverage in the AFR.

Then, this from Keane:


But neither [Oakes nor Crabb], for mine, really got to grips with the central problems confronting the media and politicians.

Neither does Bernard, by the way, but more tomorrow.
at 7:31 pm