Australia's first media consisted of message sticks and rock paintings. As a business model it wasn't broken so nobody fixed it.

Australia's second media consisted of shipping news: comings and goings at Sydney Cove, snippets of news from Mother England and ports visited along the way. New-media nerds like John Fairfax put pages out there and worried how to monetise it afterwards.

The very idea that a PR dolly like Scott Morrison should stand before a bunch of Australian journalists and sneer at "the shipping news" proves that they have no pride in their 'profession'. He owes Australian journalists far more than he could ever repay; none of them, not one stepped up to give him a backhander, verbal or otherwise. Telling journalists he wasn't going to release information must have killed him, especially as Morrison is absolute crap at every aspect of government other than spruiking.

Morrison's father was a police officer: little Scotty asking him how his day went could be rebuffed with "operational reasons", but the whole country is not being governed by Morrison's dad. But let us not dwell on that irrelevant twerp.

The negative case is widely deemed proven with the comms strategy, such as it was, of the Gillard and Rudd governments. Whether the positive case can be made, by controlling the message of this government while maintaining its credibility, remains to be seen. I believe they will have a red-hot go at controlling the message from government, but the evasions necessary to maintain an overarching message of competence will see the government lose credibility.

It isn't quite true that anyone who goes off-message will be excoriated. Elected representatives are disposable - this government could lose a dozen seats at the next election and still retain office, and preselections favour those who toe the line - but when Mark Textor wants to say something but doesn't want his name used, where is the journalist who will insist he go on the record? You'll still see "senior Liberal sources" appearing in the media when Coalition communication strategists want to make a statement without being seen to have made it.

Those of us who thought the Coalition's front bench were dummies have been vindicated by measures such as this. The man who appointed them, Tony Abbott, thinks they are all clowns when it comes to deciding who they will appoint to help execute functions of government, and how they will communicate their decisions to we who are governed.

Kevin Rudd's "Gang of Four" were all elected - Julia Gillard, Wayne Swan, Lindsay Tanner and Rudd himself - and still the government became paralysed in its ability to process information and make decisions quickly. Tony Abbott saw that up close. He is not running a reformist government, but such ideas as he does have require extensive consultation and forethought, and some concern that any consequences arising from decisions will have to be borne by those who made the decisions. Abbott cannot guarantee that his government will not be sidetracked by events that impose requirements for consideration and consultation, in the way that the Asian financial crisis beset the Howard government and the global financial crisis beset Rudd.

Even so, Abbott still cleaves to the media-adviser fantasy that it is possible and advisable to control both the message that a government sends, and the manner in which such messages will be received. Astrology and chicken-entrail-reading are far more appropriate and valid predictors of political success than Managing The Message. This fantasy is the structural weakness at the heart of this government. It will negate the guile and strength that Abbott has shown in manipulating the press gallery and his colleagues to get to the top. This is a weakness that journalists cannot detect or examine in any sensible way; they might be able to detect symptoms of this problem but will flinch before that root cause.

They had better be the smartest and most warm-hearted people in the land, never too busy for anything that truly matters. They would be wise to talk to Alister Jordan or Deirdre Willmott, to Jim Spiegelman or John Menadue, or to Ainslie Gotto about what it takes to run an entire government fronted by muppets from the back rooms. I bet they don't, though.

With Walshe and Credlin (and other as-yet faceless and nameless minions in the bowels of the Prime Minister's Office) exercising real power over the country's legislative and executive government, suddenly complaints about too few women in that sheltered workshop known as Cabinet seem beside the point.

There is an obvious strategy for the opposition (not only the formally constituted Opposition but those sneeringly termed "the minor parties", which are ignored until they exercise power over government decisions at crucial times, which always take the press gallery by surprise). That is to pepper the hapless ministry with questions and issues until its veneer of calm and focus begins to look like complacency.

If this government gets a reputation for being able to raise hell in opposition but calmly deflect it in government, it will be re-elected comfortably. Such a strategy would reinforce the reputation of the last government as one that could raise issues but not resolve them, casting a pall over the opposition as an alternative government. Any opposition that looks like a pale imitation of the incumbents is done for, and a smart Opposition Leader would avoid such a strategy.

This decision to outsource political decisions to non-politicians isn't simple hypocrisy. It's a flagrant demonstration that he doesn't get how government should and does work, and that their rhetoric to the contrary is so much cant. I thought that would prevent this government from coming to office at all, but it remains sufficiently potent to erode what little goodwill it has and fling it back into opposition.

You can accept an imperfect outcome from those who will deal with you, and in any democracy such a way of operating is fair enough. That buy-in is an essential part of the strength of democracies. Some bureaucrat sitting in Canberra deciding what is or isn't good for you can only make for a government that is stupid, and hopefully doomed, before it has even gotten underway.

The great example of the flaws in this strategy, and with the wider student-politics model of governing through disengagement, comes with asylum seekers. They can decide what they like in Canberra, but it's in your community and mine that such unknown and desperate people will settle. The only way out of this disgusting position our country is in, is for politicians to level with us. Give us the stats, get out there and show us that they aren't scary and in fact are doing lots of good things. Both candidates for leadership of the ALP have promised to do this, but frankly I have my doubts.

If Tony Abbott can waste his preparation for high office gutting fish and donning hi-vis then his successor (as both Opposition Leader and PM) can shake hands with asylum seekers and welcome them to the community. Gruntback radio in Sydney will go berserk, but Labor has to have the courage to write them off in the way that UK Labour stopped truckling to Murdoch, and has started to look like a strong alternative government as a result.

Both Annabel Crabb and Simon Copland have fallen for the syllogism that because information is released it can only ever be beaten up and blown up, so it's best not to release information at all and assume that those who govern us know what's best. Journalistic failure excuses rather than exposes government duplicity, so let's all cover up both and be polite about it.

Both Crabb and Copland are admitting professional failure by saying that hysteria is the only valid journalistic response, the only context in which that information can be put. If journalism was a serious profession, those two would be drummed out of it. They will not be vindicated, but rather their failure will be compounded, if Morrison is right in assuming that the flurry of protest about not releasing asylum-seeker arrival details will die down eventually.

The ultimate example of policy failure in asylum-seeking is SIEV-X, and the incident at the end of 2012 where an asylum-seeker vessel foundered on the rocks at Christmas Island. Michael Keenan, a Liberal MP from Western Australia, wept at the images of Christmas Islanders reaching out to those desperately attempting to get ashore. Here's an image of Michael Keenan shortly afterwards: 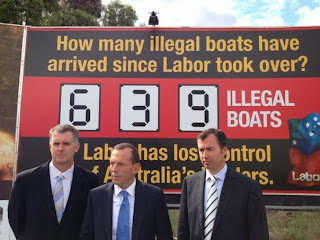 That's him on the right, in front of a billboard demonising asylum-seekers. Back then you didn't hear people like Amanda Vanstone calling for a bit of shoosh to discourage the asylum seekers, because it would have been as stupid then as it is now.

Keenan at least has the good grace to look a bit sheepish at that event - but cheer up, because he is now the Minister for Justice! Like all ministers, he reports to Kate Walshe and Peta Credlin and does nothing but what they think is best for him to be seen doing. That's small-j justice for ya: weep for Michael Keenan if you like.

I don't mind being ruled by those who are unaccountable, so long as they are absolutely right about each aspect of everything all the time (and if you think the latter clause in the preceding sentence is unreasonable, then the former is not on either). Best to get this post out while it's still legal to criticise Morrison, Keenan, Walshe, and Credlin.
at 8:38 pm