The Commission of Magical Thinking 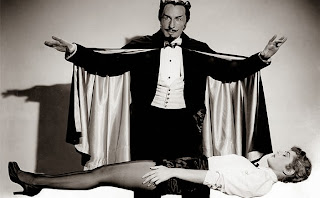 Auditors, it is cruelly said, are people who lack the wit and verve to become accountants. They tend to be so focused on what's there that they tend to resist speculation, or be incapable of it. I wondered why there was so much hoo-ha over the Commission of Audit and why it took so long to report, and for once sympathised with the intrepid sleuths of the press gallery in not pushing for its report to be released.

I was surprised when the document appeared to be a veritable festival of speculation - this government's answer to Rudd's 2020 Summit. Perhaps I shouldn't have been: for a start, the Commission contained no taupe-souled auditors, another Abbott Government disconnect between what it says on the box versus what's in it.

Secondly, for a document that would foist so many additional responsibilities upon the states, it contains nobody who had actually run a state government (and who would they pick anyway? Nick Greiner was unwell, Jeff Kennett would have tipped people off to cuts cuts cuts, Ted Baillieu or John Olsen or Rob Borbidge would've just sat there, Richard Court has disappeared comprehensively from public life - John Fahey would have been ideal, and even Gary Humphries could have used the extra work. Oh well).

Press gallery reporting on federal-state relations is stuck in the Keating frame about Premiers and a bucket of money, but in reality the disconnect between those responsible for raising money and those responsible for spending it is one of the key dysfunctions in our political system. The Commission was right to raise the issue but their suggestions are inadequate and so is this government. I live in NSW, the state with the best educational, police, and health services; I'm all right Jack, but I pity those of my compatriots who are far from being my neighbours. Queensland and WA are the fastest-growing states and neither has a AAA rating; if the government of either or both started borrowing to fund infrastructure, Hockey for all his rhetoric would have conniptions. The Commission talked about offering states a parallel income tax, a 1930s idea last heard of under the Fraser government.

Privatising Australia Post is a joke. This government doesn't have the vision to turn it into the logistics behemoth that Deutsche Post has made of DHL, so it busies itself with petty defensive bullshit like this. This government would sell it to a friendly outfit who'd invest no money in it, run it into the ground, and then hire some ex-staffer to lobby for more tax breaks and handouts because they can't make a go of it. This is not a proposal from people who understand government and business, but the opposite.

So too, the proposal to benchmark ABC and SBS against the broken TV networks: fancy having lived in Australia as long as that lot have and confusing national broadcasters with commercials.

The proposal to have university students pay for a greater proportion of their degree isn't well thought out and seems designed to align with the Kemp-Norton review of higher education rather than any sort of honest examination in its own right.

When I left school in the 1980s the smart, diligent kids studied medicine and law. There was serious money to be made for graduates with those qualifications. With the introduction of HECS at the time, paying back education costs as a return on investment seemed fair. Now, graduates in both those fields are in oversupply, and no other field of study has taken their place (with the possible exception of public sporting academies designed to generate high-earning athletes, and even there a small proportion of graduates are covered).

This deflation of education cost-to-earnings has animated debate in the US but Kemp and Norton have largely missed it with magical thinking about the market, and the Commission was wrong to even comment in an area it clearly hadn't examined (concern about duplication, perhaps? Why not just leave it alone?). Countries that invest in education reap economic growth and prosperity; countries that leave those choices to individuals do not enjoy similar benefits. It's a real pity that the commission missed that.

The same applies to the 2% of GDP pledge for Defence, an oft-repeated statistic that has all the hallmarks of being plucked out of the air - especially when couple with calls for a White Paper, which presumably would test this very proposition, and followed by the questionable overinvestment in the F-35. Auditors would have picked up on the idea that investments in diplomacy and soft power would be better investments than this or that hardware.

Means-testing family homes for pensions is very much not a winner. There is a shortage of housing stock, let alone for older people who'd be looking to buy suitable premises once they had been forced to sell their existing homes. Talk about social disruption and ... no, this government simply won't do it. Same with competition for pharmacies, I mean what sort of country do you think we're running here.

The reason why you know this government is not committed to the NDIS/DisabilityCare is because they think it's a charity rather than a economically rational rights-based system, which is why there's all this rhetoric about "trials" and pushing out timelines and "genuine concern", etc. This will go before PPL does.

PPL is bollocks policy, but it is a talisman for whether or not you can trust Tony Abbott. If he junks PPL he will not be believed about anything, if he waters it down he will get no credit for it, and if it goes ahead it will be an albatross around his neck. Remember in 2007 how conventional wisdom held that Howard would be re-elected by people grateful for tax cuts?

There was a genuine conversation to be had about the age at which the pension kicks in. Rudd sprang the age increase to 67 as a surprise, reinforcing his reputation as a credibility-free stuntman. Abbott and Hockey have essentially done the same thing. They could have kicked this issue into the second term, consulting with older people and made the case for gradual increases to pensionable age (and enforced this on the parliamentary pension schemes), as though they planned on a long-term, substantial reform program. If Hockey were the better man and politician than Abbott, he would have taken that initiative, as Keating did with Hawke (who knew a thing or two about consultation). Instead, they've put the wind up people, the opposite of all that no-surprises stuff they promised.

If you're going to deregulate wages so that they go down, and cut benefits to low-income earners, it makes sense that such people would go to areas where housing and other living costs were lower. Yet, you show me a low-cost area of Australia and I'll show you an area of high unemployment. By mandating that low-income people be restricted from high-unemployment areas, Shepherd and his gang simply haven't thought things through and there is scant hope for Abbott in this respect.

These guys who govern us are not the guys to talk about 'sacrifice': not at the Budget, not on Anzac Day, not ever. Someone who claims every 'entitlement' is not the person to end entitlements. Any sharing of sacrifice will not follow through into a sharing of spoils when we come to the sunlit uplands. To share with someone, you'd want to spend time with them; and nobody wants to linger when Abbott's around.

The other place where their imagination genuinely came a-gutser was on the revenue side. It occurred to none of these giants that there was any alternative to taxing either business or incomes, and given that limitation jacking up income taxes was the only option. With miners and financiers making super profits off government guarantees, you'd think they would have been good for a bit of relief on spending cuts and direct taxation - but no, sadly.

This is a government that has outsourced its thinking about what sort of country we would want Australia to be, and how best to realise that - which is the best part of politics. It would have embarrassed itself by appointing the IPA to this Commission, but did the next best thing by lining up a range of exhausted volcanoes. The last government did something similar, but it took a grim pride in Getting Things Done which this government talks about, but doesn't really share. Whitlam and Gillard passed a flurry of legislation, while for Abbott even scrapping regulation was as half-hearted as the passing of it.

This government saw the books before the election - it only "inherited a mess" by realising how the policy vacuum they created for themselves is holding them back. They were careful to frame the Commission's terms of reference in such a way that reflected it back onto the government, and they succeeded: The Commission is a stale joke, and so is this government. Abbott and Hockey seriously believe they will get credit for not going as far as the Commission want them to, while the IPA and BCA will bag them as wimps over the smallest omission. Nobody will believe their protestations that they would never do some unpopular thing spelled out by the Commission; Abbott is nowhere so awkward as in the middle ground.

They will be flat out getting any of their big-ticket items through and it will be fascinating to see which ministers can make the best of the limited scope and time ahead of them. That double-dissolution isn't much of a threat these days, and neither is Tony Abbott.
at 7:43 am