Found out 2: When the Beijing smog clears

The press gallery went to the last election conveying the impression that Coalition policy, even though it existed in scant detail, was immeasurably better than Labor policy on all fronts.

Then, when the Coalition started going back on pre-election commitments, the press gallery just got confused. There was no howl of betrayal, as there was over Julia Gillard's casuistry on carbon pricing, just a kind of befuddlement or cheerily insisting that disappointment must somehow be exciting - or in any case, something we just have to put up with that its words and actions should be so divergent.

As time has gone on the press gallery have engaged in a kind of Dance of the Seven Veils as this government has shed layers of credibility. So its environmental policy is pretty ordinary, and there really is so vision for carbon abatement or even the Reef. All right, so its commitment to civil liberties is non-existent. Yeah, so there is no economic policy to speak of, and the government can't even get its budget through the Senate. It has no ability to negotiate with those outside its command-and-control.

It's interesting to note that former Coalition members Clive Palmer, Nick Xenophon, David Leyonhjelm, and Bob Day are not subject to the same 'traitor' rhetoric that beset former Nationals Rob Oakeshott and Tony Windsor (Peter Slipper had been elected to Parliament as a Coalition MP, while the others hadn't). Nobody in the press gallery seems to have picked that, practising the goldfish journalism of an eternal present.

Was it only a matter of days ago that the press gallery consensus had congealed around the idea that while the Coalition wasn't great at any sort of policy really but it had some sort of natural gift for foreign policy. Some conceded that Abbott had a few early glitches with the Indonesians and the Chinese (Mark Kenny and the Murdoch outlets refused to acknowledge even that, insisting that such a graceful swan could never be considered an ugly duckling), but they all agreed Abbott was some sort of natural diplomat.

(Note that the more concerted the opposition to an Abbott government policy, the worse Abbott looks. Even with the prospect of opposition, as with paid parental leave, does this tough guy look shaky. Labor gave him unstinting support on foreign policy, and only with that absence of opposition could he even appear capable.)

With all his experience in domestic and foreign politics, Peter Hartcher never picked that the US and China would do a deal on carbon emissions at the APEC meeting in Beijing. [$] Hamish Macdonald in The Saturday Paper didn't pick it. Nobody did. The English-language papers in China and the venerable US news outlets all missed it, too.

It isn't only hippies who think it isn't good enough for this country not to have a carbon abatement policy. It never was. The Canberra consenus that proponents had to wait until Abbott was good and ready to come around to the idea in his own time was wrong, too, but it was consensus and all the press gallery had to do was put quotation marks around it. Our entire political class has been wrongfooted, and the journosphere can't properly report on that because it too has been caught out.

They don't even have the good grace to admit they missed the biggest foreign policy story of the past 20 years. How a mixed metaphor became a dumb story is the sort of thing you get when you fail to clear out dead wood from 20th century journalism.

It was always stupid. Always. 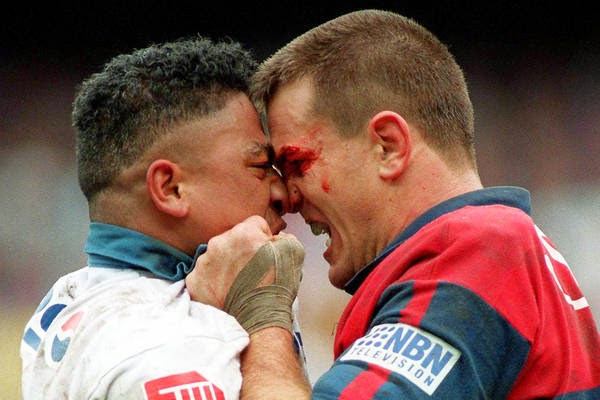 As soon as it was uttered, all of the images that Abbott sought to shake off - the thoughtless thug - were reinforced. Even if he had literally shirtfronted Putin, it would have made our foreign relations worse rather than better. What use is the press gallery if they cannot anticipate?


The opportunity to rub shoulders with global leaders usually gives the prime minister of the day a boost.

No it doesn't:
It is time for that press gallery cliche to die. I know journos love it, but it has no basis in reality and hence is useless as a prop for reporting.

The opportunity to rub shoulders with global leaders does nothing for the prime minister of the day. Nothing at all.


The reporting, the photographs and especially the cartoons, have reduced serious diplomacy to high farce. For that Abbott has to take a large slice of the blame.


How Abbott would now like to erase history and start again, allowing himself to present as a mature leader nudging and cajoling the world's most powerful towards important global solutions.

Here Cassidy claims to have some sort of insight into Abbott's mind. He makes a number of assumptions that no member of the press gallery is entitlement to make about Abbott, namely that he has:
Cassidy has no right to hold to those assumptions, or to hide journo inadequacy behind them.


There is evidence that the shift from domestic to foreign policy, from the budget to national security, will not be the permanent game changer the government had hoped for.

Well, no shit - what made anyone think people could be deflected from Narwee and Nunawading to focus on Naypidaw? Was there any basis at all to assume that this was even possible, and that those betting the government on it were crazy?

30 years in Canberra and you really don't know? So much for being an insider. Give it away.

There would be no greater signal to our political class about the impact of cuts to the public broadcaster if Insiders were to be axed.


The global challenges - and particularly the conflict in Iraq - should be a plus, especially with the opposition offering bipartisan support.

The reason why Labor offered bipartisan support was to maintain their poll lead over the government. Cassidy should realise that politics is a zero-sum game; that the government cannot be said to be doing well if it is polling behind the opposition.


At home, there is a growing realisation that the country does indeed have both a spending and a revenue problem, no matter what Coalition frontbenchers said in opposition.

If only we had experienced journalists at the time to point this out, anticipate what a Hockey budget might look like, and whether it would even pass a fractious Senate.


There are excuses. Commodity prices are falling ...

This was foreseeable before last September.


... and the Senate is preventing the government from reversing some of Labor's spending initiatives.


But when a party speaks with such bravado and conviction in opposition, excuses don't offer much shelter in government. Reality is starting to bite.

Reality is not something that was invented this year. Politicians talking with bravado should be called out by journalists, rather than merely quoted.


Before mid next year the Abbott government has to commit to targets out to 2025. According to the Climate Institute, to match what the United States has done, Australia will have to reduce emissions not by 5 per cent, but 30 per cent. Even if that was their inclination, how would they do it? And at what cost? Abbott has already said that even if it becomes clear the 5 per cent target cannot be reached by 2020, he won't be allocating any more money.

Cassidy really can't cope with the idea that a) changing circumstances call for different measures, and b) sometimes often there's a difference between what Abbott says and what comes to pass.


On top of that, because of where China says it's heading, there is now a question mark over coal exports.

That and the fact India has banned them outright, and nowhere else is picking up the slack. This has been coming for a while, Barrie.


The one breakthrough over coming days will be the trade deal with China. But again trade deals are not created equal. There is give and take.

It will definitely be a breakthrough, unless it isn't a breakthrough at all. What a classic piece of insider wank. Sometimes you sit on the fence, sometimes the fence sits on you.

The Chinese have the advantage in this deal. Abbott has said that he's desperate to do a deal of any sort - arse-selling, remember? - and you know how negotiations go when the weaker party is under pressure. Surely that press gallery experience has to be worth something.


Until the details are released and digested, it's impossible to predict how the public will respond.

In Australia, there is unlikely to be full-scale rioting. Nor is it likely that Coalition MPs will be greeted in their electorates as conquering heroes, with garlands of flowers and kisses from a grateful public just like western forces received in Iraq in 2003. Studied indifference will most likely be the reaction. The media will focus on beef cattle exports, as they always do with trade agreements under this government, and skate over who gets stiffed. A few companies that donate to the Liberals anyway will express delight but will be unable to make good on the promises of the agreement. Long-term impact, economically and politically, can be be anticipated as bugger-all.


Against that challenging background, Tony Abbott could have done with a hassle-free APEC and G20 to build on his status and credibility.

That was never an option. This is a stupid assessment. Hassle-free means no achievements, another empty and expensive talkfest.

The US-China climate deal is a massive achievement, one for which Abbott deserves absolutely no credit.

The journalists who have not scrutinised Abbott and who disparage those who have questioned him cannot protect their boy now. He put all his chips on foreign policy, which journalists don't understand and rely on official announcements to interpret for them. This announcement is clear, and all the spin in the world can't fix things (if you believe the Australian government did know about the US-China deal ahead of time, then you have to believe they couldn't be bothered lobbying on behalf of fossil fuel companies, when this has been its core business to date).

Because the political class has outsourced our foreign policy, and the journosphere accepts this is the way it has to be (with the occasional empty gesture), our country is exposed to initiatives taken elsewhere to a greater extent than would be the case were we to have our own foreign policy.

This government is run by control freaks. They bet the government on things they can't control, developments in Washington and Beijing and the other great capitals of the world. And now events have gotten away from them, and now even the dimmest bulb in the press gallery is obliged to note this.

Political parties can't develop such policies and the media can't critique them. Neither can adapt. Both institutions will have to be gotten around to develop a meaningful foreign policy for this country.
at 8:28 am