Losing it 1: The spearhead

Traditionally, an issue has popped up in the media, squadrons of journalists rush out with pre-prepared cliches to smother any public interest, and the issue dies and is replaced by another one. They may be weighty issues, they may not; but you can be sure that the media will churn through them.

In recent years, editors and news directors have lost control of this media churn. The decline in consumption of traditional broadcast media means there's a strong correlation between social media users and the remaining readers/ listeners/ viewers of the broadcasters. The smarter people in the broadcast media realise this, while the less smart ones - disproportionately found in the press gallery, and "media management" roles in the political class - persist with the view that social media are somewhere between annoyances and competitors. They can't dismiss us out of hand (the old saws about cats or breakfast pics have had their day) but they dare not admit we keep them up at night.

Adam Goodes' Indigenous dance celebration at scoring a goal didn't seem so strange to those of us from northeastern Australia, as Preston Towers observes in his masterful account of the controversy. Rugby league player Greg Inglis does a goanna move after he scores tries, which is just Inglis being Inglis; it is not worthy of booing even by fans of teams Inglis pays against, or by those who (for whatever reason) don't like him.

It's true that New Zealand's rugby union team, the All Blacks, do a Maori war dance (haka) before every match, facing their opponents at close range, sometimes including a genuinely menacing throat-slitting move. It's also true that the Australian team, the Wallabies, did a half-hearted Aboriginal-derived response, but that they haven't done it for decades. Because this guy doesn't realise that he isn't quite as Proud Of Our Aussie Heritage as he might imagine.

It also makes this whole debate beside the point. Rugby fans are no more/less Australian than AFL fans, no more/less uncouth or passionate, and no more/less across issues of structural racism.

Goodes is not, as one cranky fan pointed out, the first Aboriginal AFL player; he's not the first prominent Aborigine who uses his public profile to help young people. What makes him different to those who came before, like Nicky Winmar or Graham "Polly" Farmer, is that prominent Aborigines these days can mix it in public debates. Prominent Aborigines like Goodes, Rachael Perkins, Larissa Behrendt, Noel Pearson, or Marcia Langton are central to public debates involving indigenous people unlike previous generations of leaders like Harold Blair, or Bennelong.

The idea that Goodes ought not express pride in his heritage, or that he's being aggressive in doing so, is rubbish. Ron Barassi has spoken of his Italian heritage, including the harassment his father suffered during World War II when Australia was at war with Italy. Dermott Brereton's hardscrabble upbringing is not unlike the disadvantage suffered by many Indigenous people. He has spoken of his Irish heritage and the threats he received as a result.

Did Brereton really never offer any support to the terrorist organisation IRA? Has Goodes ever supported terrorism, openly or otherwise? Brereton's criticism of Goodes is curious. He looks like an old stager who doesn't get it. Mind you, that puts him firmly in line with the gutless all-about-the-money AFL Commission.

When he was called an "ape" showed a deft touch in raising the issue, then defusing the anger that arose from it. He insisted the child be protected from the ravages of tabloid (broadcast, "professional") media, and kept the focus on structural, endemic racism. Accepting his Australian of the Year accolade last year he did much the same thing: raised harsh truths squarely, and then called on everyone to face them together.

I wish we had a Prime Minister who could do that.

The man who has not handled Goodes' comments at all well was racial discrimination offender Andrew Bolt:

People who loathe Bolt will show that image for the rest of his life, and probably beyond it. Bolt has to keep up his persona of the disappointed conservative. Even after his conviction he was "disappointed" and, like Goodes yesterday, took time away from his job. Bolt finds accusations of racism directed at him to be "chilling", as the young people say.

Appearing calm and measured is essential to keeping onside well-meaning conservatives who don't pay close attention to media controversies, but who want a respectable champion of their values in the media when they do dip into it.

If Bolt blows his cool he loses those people. The idea that he's a hate-filled, seething bigot will turn advertisers away, and NewsCorp will drop him. James Packer, a major shareholder of the TV network that broadcasts Bolt, has already shirtfronted him. If there is a "war" over "race hate" between Goodes and Bolt, then Bolt has already lost it.

Spittle-flecked partisans aside, pragmatic and experienced media professionals like Jo Hall expected this to blow over: 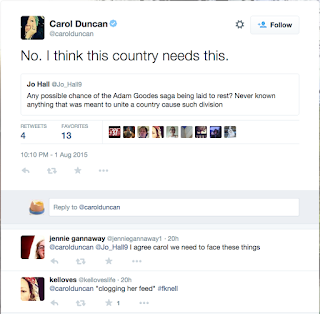 I agree with Carol Duncan and Paul Daley: we do need a discussion, one that doesn't end with recriminations and moving-on-to-the-next-story but to somewhere productive, the "brave and fine" conversation we've always been promised but could never quite manage by ourselves.

The AFL had only planned to have one Indigenous Round but has effectively been forced to have a second this past weekend - without Goodes present, and with the possibility that he might retire rather than continue as a lightning-rod for the country's worst instincts. The AFL Commission has not done the leading when it comes to this issue, it has been led. But this goes beyond one sport, which bears more responsibility for the nation than it can reasonably bear.

Again, I wish we had a Prime Minister capable of leading such a discussion. The press gallery promised us that Abbott was both sincere and capable when it came to Indigenous policy issues, and they acted all surprised when neither turned out to be true.

Abbott has gone to ground, which he usually does when the going gets tough. He could have leavened his clearly difficult experience with Bronwyn Bishop by stepping up with even some noble words on this issue - that would have been enough for the mugs in the press gallery. He's not going to talk about on-piste matters. He might not understand AFL or race relations, but he's in that job because he knows how to fool the broadcast media. If he absents himself from the media, the thinking goes, the broadcast media will run out of new angles and the story will die. All that's happened for him and his office is he's been left behind. The broadcast media promised us he was "Prime Ministerial", when he was never anything of the sort.

The broadcast media have now been abandoned at the very point where social media is running rings around them, and they need to borrow Authority from external sources. They're just there to be used and abused by this government, a realisation everyone has come to except them.

They still believe that an endemic issue will just churn through and Good Old Tony will come through for them once more. He'll play them, and they think they play him too, bless them. When they do start focusing on another issue, they might find less public engagement than traditional broadcasters are enjoying now. They become less adept at picking the right issue for their One Daily Story, and their Access Privileges count for less and less with a smaller, more engaged audience.

The worst thing journalists can be is not biased, or even shallow, but obtuse. On Indigenous issues generally, and on Goodes in particular, the media sure have been obtuse. This can't end well for traditional access-oriented broadcast journalism.
at 9:30 am