Malcolm Turnbull addressed the NSW State Council of the Liberal Party and was jeered for claiming that the party isn't run by factions (see video in this article).

Here's what he was doing by saying that. Turnbull wanted to be jeered by factional hacks, and to appear to float serenely above the factional fray, which is what he did.

Gullible journalists like Adam Gartrell report this with the cliche LIB SPLIT SHOCK, but who even listens to those people? The imagery there is of those who still believe in Abbott - the intelligent, decent and noble Tony Abbott of fantasy, since witheringly exposed - losing their decorum in the name of a cause that has already been lost. Didn't Turnbull say some nice things about Abbott - and this is how they behave?

They all look like sooks and grumps now. Who wants a sooky, grumpy future when they can have the sunny, vague optimism of Malcolm Turnbull?

Journalists initially love it when parties march n lockstep, then they get bored and regard partisans as muppets. Whenever journalists get criticised for their poorly-written stories on social media, they assume that such criticism can only come from partisans. When parties engage in debate, journalists can't examine he merits of one side or another so they just go BLOOD IN THE WATER DISSENT CHAOS and assume that's good enough for the likes of you.

Turnbull has played his internal party opponents off an even break. Liberals will be seething that the dreaded media are searching for the worst in their recycled leader; Abbott will have won no new sympathisers today.

Is there any objective truth to the notion that factions don't run the Liberal Party?

In the absence of any hard data, let's rely on the following graphic for what follows: 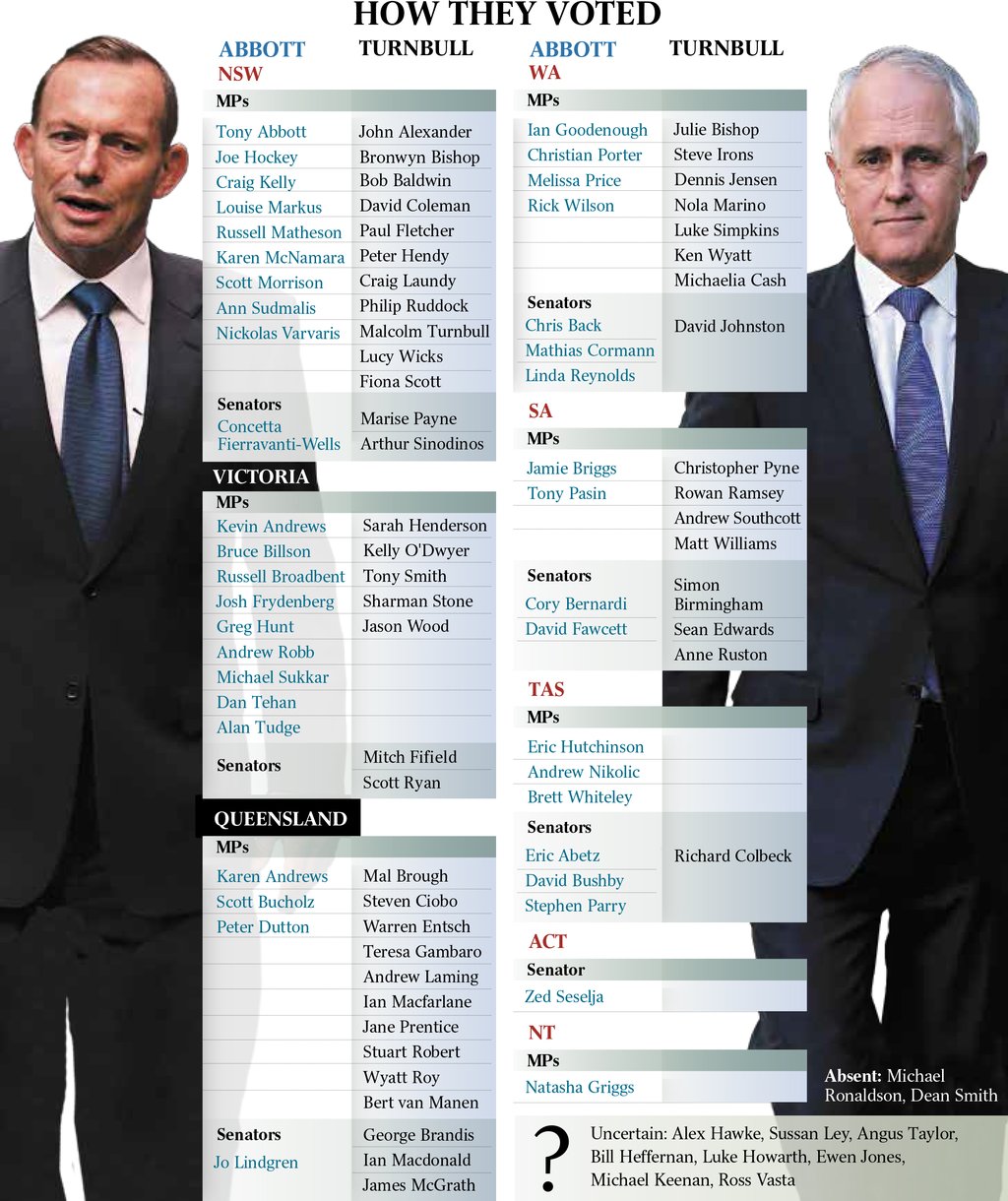 (c) The Australian
If conservative factional chiefs had insisted on a vote for Abbott, then the following conservatives can be said to have broken ranks:

There is not a bleeding heart anywhere in the above list. Had those conservatives voted for the more conservative candidate (Abbott), that candidate would have won.
Bronwyn Bishop has been in Parliament since 1987 and has participated in many Liberal leadership contests. As a fierce warrior for conservative values you might expect she'd have voted for the more conservative candidate in each of those contests, and that last month's vote is some sort of aberration. Sadly, no: at her first ballot in 1989 she voted for Andrew Peacock because he promised her a frontbench role, and Howard wasn't that desperate. Six years later, Downer handed over to Howard on the proviso that his frontbench be maintained, which included Bishop. Howard dumped her at the peak of his powers, after she'd had more than a fair go. She is vindictive and/or an opportunist before any other consideration, but happy to tear strips off anyone else she deems "wishy-washy".
Bishop might have allowed herself a hiss from between clenched dentures, not knowing or caring that it played into Turnbull's hands.
If the Liberals had the sort of rigid factions that the ALP has, all of the aforenamed would be dingoes and rats and what have you, and none would be guaranteed of preselection (Southcott is not contesting the next election, and maybe James McGrath will summon up the courage that deserted him in 2012 to run for Fairfax).
Only in Tasmania and Victoria did conservatives have any luck in holding the line. Conservatives in Queensland saw the consequences of holding the conservative line (so did the Vics, but their party organisation is more robust and unforgiving). Western Australians take the view that if you're going to travel all that way to Canberra, why bother for the sake of opposition?  NSW is pretty tightly factionalised, with only three opportunists breaking for the winner.
Turnbull is quite the showman, but he is not such a populist that he can pull off a call-and-response like US politicians can and do. By tossing out the factional bone, and watching smirking as the factional dogs fought over it, Turnbull positioned himself above the factional fray. He played the factions, and played the press gallery too.
He was confident that the press gallery can be relied upon to draw the wrong conclusions - but nevertheless, present him in the way that best suits his interests.
at 8:01 pm