Before I start, let me apologise to regular readers for the long delay in posting at a time when you'd expect me to post often and much. I feel like I've said everything that needs to be said about the horrible vacuity of campaign-trail journalism, while the big media organisations keep pumping out the same old crap. Those who think I've said too much already can agree that I gave those drongoes trashing once-proud media outlets more than enough rope.

1972 was clearly a big year for campaign-trail journalism. Whitlam's launch of that year set the template for every campaign launch since: the upbeat speech, the balloons, the camera shots of young hopefuls and elder statesmen. Tony Wright and Dennis Shanahan [writes for NewsCorp, find it yourself] both wrote jaded gobbets about how lame it all was - but if those guys' decades of experience means anything, they had no right to expect any better. The US election of that year yielded The Boys on the Bus by Tim Crouse and Fear and Loathing on the Campaign Trail by Hunter S. Thompson, and every single word written or spoken by every campaign-trail journalist has been a warmed-over take-out from either/both of those seminal texts.

They spent three years wishing they were on the campaign trail, and now they're here they are bored and tired - and nobody cares that they're bored and tired, because politics rendered in a boring way isn't intended to arouse sympathy or any other sort of engagement: 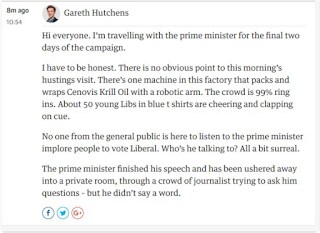 (c) Guardian Australia
Campaign trail journalism had to reach a point of cultural exhaustion at some point, and here we are. All those photo-ops and proto-announcements counted for nothing. When you're engaged in non-work, you can't expect sympathy from those who get tired from working real jobs. The press gallery sat around for three years watching their drinking buddies mess about with policy proposals that had real-world impacts on the lives of their readers/ listeners/ viewers.

They couldn't craft the words and images that could describe what was going on, and how it affects us; easier to comment on pretend-elections and gossip, and the dummies in the editorial suite had no better sense for news than theirs. Popular disengagement is political failure, and it's a failure of journalism too. Both have far-reaching impacts on politics and media which can't be imagined, let alone managed, by those who run either type of organisation. Now they wonder why there's disengagement, and you still can't tell them: the old traditions of campaigning have worn so thin, and campaign-trail journalism goes into the skip along with all the other how-to-votes and hopes and dreams.

What's clearly failed here isn't just campaign-trail journalism. It's the idea that you can only report on federal politics from Canberra, or by flying in clueless pinheads from Sydney like Simon Benson or Peter Hartcher, while cutting out local journalists. Everyone talks about Xenophon in South Australia, but once you get past Sydney/Melbourne condescension to that state the only actual Croweaters the press gallery talks to are other journalists, or Christopher Pyne and Penny Wong - and Xenophon seems to be a reaction to the problems those two caused or failed to solve. Rob Oakeshott explained how Fairfax's centralised ad-buying undermined local editorial in the Port Macquarie News. Sydney/Melbourne media could cover from the suburbs of those cities but not from regional Queensland, or hardscrabble Tasmania - even Windsor vs Joyce in New England was assumed to be a toss-up when it wasn't, because the desire to pose for 'balance' outweighed any genuine journalistic instinct to report the story.

Nobody votes on a national basis. It's why those who complained Tony Abbott or Kevin Rudd were "elected Prime Minister" are talking nonsense. It's why journalists relying on "national polls" add nothing to anyone's understanding: if you can't explain which seats go this way or that and why, you can't explain the result; you can only suck air through clenched teeth and go "ooh, it's close!", and there's no future or value in that. Polls showing minor inflections may nonetheless be valuable for pollsters - but it is poor fare for journalists, and irrelevant pap for readers/ listeners/ viewers/ voters.

Let's remember clearly how the media reacted to developments in this campaign:
You've failed at journalism when you look at something up close for a long time and you can't tell us what's going on. When that thing is an election campaign, where we have to decide how our nation is to be governed and by whom, the stakes go far beyond newsroom japes.

A centralised campaign seeks only the information it wants, and its judgment about what it wants is rubbish. Traditional media insistence that its judgments match voter needs are demonstrably false. No appeal to their good sense or better nature is possible.

We've talked for a long time about the declining social bases of the major parties, and the fact that voters are increasingly rewarding people for trying to work out different options that the major parties dare not attempt. Only corporate donors expect whole-cloth solutions from political parties, which is why major parties pleading for first preferences in both houses sound like they're peddling an agenda other than that of the voters. Minor parties need not seek out traditional media to be electable (except for Pauline Hanson, that unflushable turd and wholly-owned subsidiary of Channel 7), and in return traditional media are constantly surprised by each new wave of minor-party politicians.

Major parties value those who'll toe the line over those who can think on their feet. The Liberal injunction "Stick to the plan" (when there was no plan to stick to) seemed targeted to party members rather than a democratic polity at large. Minors and independents get by on their wits, which the drones from the majors interpret as being all flash and no substance. Cathy McGowan danced around Sophie Mirabella, who couldn't get out of her own way again. Alex Bhatal, Jason Ball and Carl Katter ran rings around David Feeney and Kelly O'Dwyer, and it will be interesting to see what (if?) the latter two learn from the experience. Journalists can't cover three-way splits or post-electoral compromise. Journalism is reductive, and is better at explaining clear differences rather than the messy compromises at the heart of parliamentary democracy. We're going to have more hung parliaments (oh yes we are), so traditional press gallery journalism of facile thrills'n'spills simply won't be able to cope.

The traditional media have lost credibility as their news judgment has departed from what people seem to be seeking in politics. It was not this gaffe or that scare campaign that turned the election - such an analysis assumes the traditional media has more readers/ listeners/ viewers than they have, and that their coverage is taken more seriously than it is. Insiders showed a ten-minute montage of dreck footage, and none of the bastards who followed had the decency to apologise and/or resign. Those who don't understand the result can't explain it.

The fact that they can't explain them further devalues traditional media as trusted, experienced sources of political information. This in turn opens more scope for minor parties and devalues poor muppets like Josh Frydenberg, who would be nothing at all without major parties and traditional media, who then seem to spray themselves with voter-repellent when they breathlessly announce "stay tuned for our exclusive interview", and so it goes down the plughole. In this article Brigid Delaney mocks Liberals who actually believed what they read/ heard/ saw in the media, who relied on insider tips fed to them by Liberals, and who then had the journos eat their hors d'oeuvres, and so on in a self-referential loop that both journalists and politicians wrongly assume will keep them all busy.

I've talked about the death spiral of traditional media and major parties for a decade (apologies again for being so light-on over the past few weeks, I've been busy), but never has it been more obvious than in this campaign. By 2019 there will be fewer journalists employed by traditional media overall, though the press gallery may remain a bloated herd. It's amazing to think that editors and news directors will again send impressionable journalists out to do warmed-over Crouse/Thompson from a school in Cairns, a hospital in Perth, a highway easement in Westensinny, etc. ...

Surely not all political journalism in this campaign was crap?

Mostly it was. Only two exceptions of quality journalism applied to public policy come to mind from this election campaign:
Now that Lenore Taylor has moved to an editorial role, Tingle is the best and most consistently journalist in the press gallery by a very long way. Price is not even in the press gallery; she's a columnist and academic, and seemingly by accident she's done some journalism when all other alternatives were exhausted. Unlike 1972, campaign-trail journalists have the ability to research and knock up stories from buses or layovers or wherever else that are every bit as good as those two above.

If the press gallery and the campaign trail produced consistently good journalism, it might be worthwhile - but it doesn't, and it isn't. Journos often moan that I don't call out positive examples: but when I do it only emphasises what dreadful garbage they have flung at us over the past eight weeks, and for years and years before that.
at 10:08 pm