You hear the door slam and realise there's nowhere left to run
You feel the cold hand and wonder if you'll ever see the sun
You close your eyes and hope that this is just imagination
But all the while you hear the creature creepin' up behind
You're out of time ...

It was appropriate that Tony Abbott should lunge for public attention at Halloween, when the dead make their presence felt without offering the wisdom of their experience, when children extort for lollies.

By contrast, Sean Kelly wrote a rather good piece on why putting Abbott back into Cabinet might not be a good idea from a political point of view. It's hard to disagree with any of that, but let's look at how the media covers this sort of thing, and how useful they are at showing us how we are governed.

Abbott thought that he'd like to be Indigenous Affairs Minister. He didn't say why; he didn't say what he could do that the incumbent Minister, Senator Scullion, couldn't do or hasn't yet done.

We live in a time when a large and diverse number of Aboriginal Australians can and do mix it with political and other leaders in articulating the wishes and needs of their people. Previous generations of Indigenous leaders, from Bennelong to Geoff Clark, could articulate the problems Indigenous people faces but could not deal with the complexities of Anglo-Australian government sufficiently to secure the lasting outcomes that they wanted.

When Abbott was Prime Minister he seemed to acknowledge only Warren Mundine and/or Noel Pearson as Indigenous leaders. He had only platitudes to offer on violence, incarceration, lack of economic opportunities, early death rates, and other issues articulated by Indigenous people themselves. Consider Tom Calma's denigration of both Scullion and Abbott on Indigenous policy, and how such a knowledgeable and nuanced examination will have no impact whatsoever on the reporting of Indigenous issues by the non-Indigenous press gallery. Yet, the press gallery as one remains convinced that Abbott has a passion for Indigenous issues - and being stupid people, no actual evidence from beyond the press gallery poses any danger of changing their minds. They are stuck on the idea that Abbott has a genuine passion for Indigenous issues. 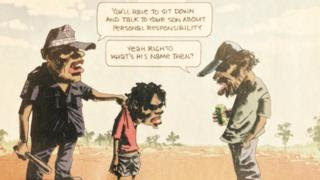 (c) The Australian
Consider what is going on in this cartoon. What sort of people don't acknowledge their own children? How can such people exercise sovereignty over land, or deny others access to economic resources in it? How can such people even act in their own interests, let alone those of others or the land itself? When ill Leak and his supporters insist this cartoon is 'true', they are arguing for defeatism in good-faith dealings with Indigenous people, and a continuation of a situation where it is best for non-Indigenous people to act in the best interests of such broken people.

Tony Abbott has been more critical of his own sister than of any output of the Murdoch press. Abbott's support base in the Liberal Party are those who want to repeal section 18C of the Racial Discrimination Act, of which the above cartoon is probably in breach for its sheer absence of good faith. Abbott cannot claim to have any sort of commitment toward Indigenous people so long as he has no opinion on the bad faith of Leak and his supporters.

This isn't a matter of culture war garbage that places Leak and his supporters at the centre of their own melodrama. This goes to the issue of Abbott's good faith in dealing with issues raised by Indigenous people, which matter to them. It goes to the reliability of the press gallery notion that Abbott has a real and deep commitment to Indigenous issues - and that the sheer force of this belief has real political consequences in terms of policy outcomes, if not the shape of the government itself.

It is genuinely pathetic that The Sydney Morning Herald can only represent this story as a spat between Tony and Nige. At least the threat to Scullion's job, however feeble, piqued his interest. Conflict in politics is a given and does nothing to attract readers. Framing this story to such a degree of dumbness so the journalist understands it does not make for a popular, well-read article capable of supporting ad revenue.

A week before the election, Abbott pulled a similar trick - this time with the Defence Minister, Senator Payne, using the same extortionate lines about healing the rift and loyalty. Again, there was no wider discussion about Australian defence policy more broadly, nor any specifics about what Payne might have done badly or well; so much for coverage of government by an experienced press gallery.

Nobody in the press gallery has linked Abbott's latest shot (at Scullion) with his prior one on Payne. Nobody seems awake to the idea that Abbott might try and pick off the Cabinet one by one in a similar manner, or that such behaviour (a week before an election!) makes nonsense of any claims Abbott may have to being a stable, team player.

Presumably because he was interviewed by an experienced military officer, Abbott declined to repeat the Defence thing at Halloween or explain why he abandoned such an ambition.

A waste of talent

Abbott was an indifferent minister, and shirked any notion of responsibility between what he said before the 2013 election and what he did afterwards. His pronouncements on foreign policy should be viewed in light of his stated aim of a Jakarta-centred foreign policy, scuppered by having to leave a meeting with the actual President of Indonesia in order to console his chief of staff, freaking out at the sheer extent to which she and he were out of their depth. To play up the importance of Abbott pronouncements means you have to forget what he was like - to set aside the very experience press gallery claim is valuable in covering politics.

When former prime minister Malcolm Fraser commented on issues like Australia's relationship to the United States, or treatment of asylum-seekers, nobody was more dismissive than Tony Abbott. When Paul Keating criticised the foreign policy of the Howard government it was Abbott, with no foreign policy experience, who was trotted out to provide a countervailing quote for journalists.

One of the funniest aspects of press gallery journalism in recent times was to see Peter van Onselen carry the flag for disgruntled Liberals who leaked to him. Every six months or so in the first half of this decade, van Onselen rehashed the same article that the government would be so much better off with the promotion of his pals Kelly O'Dwyer, Josh Frydenberg, or Christian Porter. Well, all of those people are in Cabinet now, and the government and nation are scarcely better off.

To see the proper treatment of former prime minister Abbott, let's look to the former prime minister he most resembles: Billy McMahon. McMahon hung around for ten years after his defeat as Prime Minister. He made the odd pronouncement which was of no value to anyone, including the press gallery at the time and even himself. Fraser awarded him and Gorton the sparkly bauble of Knight of the Grand Cross of St Michael and St George; Gorton took the hint and retired, McMahon did not. His electorate became a festering sump of right-wing Liberals; when he finally retired they lost the byelection.

Liberals in Warringah (Abbott's electorate) tend to be a rabble, led by the kind of disruptive right-wingers who look up to someone like Abbott. In 1998 I was a preselector for the state seat of Manly; the Liberals who lived outside the area were more serious about winning the seat for the party than those who lived there, which is why a) they didn't and b) I gave up on them. If Turnbull wanted to reform the Liberal Party, rather than just being its frontman, he would cultivate a potential candidate who would work the fiercely parochial electorate and its branches, with a view to challenging and beating Abbott at preselection. Instead, he abandons local branches to clowns who will come to repel local voters at a time when the Liberals will need all the votes they can get.

Wyatt Roy is more likely to become a Liberal cabinet minister than Abbott is to return.

Next time Abbott resurfaces, realise that his cry for "Brains! Brains!" identifies what he lacks, rather than what he has to offer. If press gallery experience means anything, its denizens should have their wooden stakes and garlic ready; better than being just another credulous screamer.

Next time political-class tragic Cate McGregor offers an opinion on defence policy, or cricket, or anything really - recall her piece on Abbott and Indigenous affairs (no I won't link to it) and wonder what her judgment is worth.

Never mind the pantomime, just tell us what is going on. If nothing much is going on, say so; stop pretending bullshit is a big deal, otherwise people won't believe you when you do have something worth saying.
at 3:02 pm